There are only 11 days left until the election, and I’m back with another update on how the Student PIRGs’ New Voters Project is pulling out all the stops to make sure young people are registered and have a plan to vote.

Every day, our team is seeing more evidence that young people continue to be fired up and ready to make their voices heard. Data from TargetSmart shows that 4.2 million 18-29 year-olds have already voted, compared to 1.4 million at this point in 2016. Youth voter turnout has tripled compared to this time in 2016 (overall turnout is up 45%), and youth vote share is also up compared to 2016. Given that young people tend to be Election Day voters, this is very encouraging, but there’s much more work to be done. With many voter registration deadlines behind us, we’re pivoting to helping every voter on our campuses cast their ballot safely.

This fall, we’re organizing on campuses that enroll 2 million college and university students.

While most of these students know about Election Day, they aren’t familiar with what can be a very complicated voting process. For example, in some states, whether your student ID is a valid voter ID completely depends on the county a student is voting in. In others, you can drop off a mail-in ballot at an early voting location but not on Election Day.

So how do you get this information out to every student on campus? Across the country we’ve partnered with more than 600 campus stakeholders, and we’re activating every single one of them to tell students how they can vote early.

We’re also sharing three videos far and wide this week (via YouTube, Facebook, Instagram, and Twitter) on what professors, campus staff and administrators, and student group leaders can do to get out the vote over the next two weeks. Produced with our friends at the Andrew Goodman Foundation, these videos feature people who are leading effective civic engagement campaigns at colleges and universities including the University of Michigan, UCLA, University of North Carolina – Pembroke, and the University of Florida. 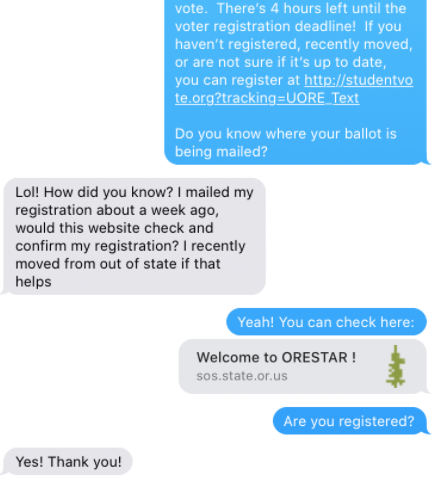 Though we’re aiming to reach as many students as possible, it’s peer-to-peer, one-on-one outreach that will create first-time voters. For students juggling midterms, jobs as essential workers, and remote class fatigue, being contacted by someone in their community can make the difference between whether they cast their ballot or not.

This week, our team partnered with the ALL IN Challenge, Vote.org, and others to host nightly textbanks with famous folks such as actress Emma Stone and La La Land director Damien Chazelle. On the first night, students texted more than 7,500 of their friends to remind them to vote.

This Saturday, October 24, is Vote Early Day, and we’re making a big push to make sure students are turning in their ballots on time to make sure they get counted. We’re a premier partner with Vote Early Day, and we’re organizing phone banks, text banks, and friend outreach “couch parties.” So far this week, we’ve scheduled more than 4,000 call shifts. Overall, more than 2,500 local and national organizations will be working to get out the (early) vote this Saturday.

Finally, in Florida, the Student PIRGs’ New Voters Project launched a joint project with the NAACP’s College and Youth Division to leave no voter behind this fall. This effort is part of the NAACP’s Black Voices Change Lives project. Polling this summer found that, compared to other races and ethnicities in their age group, 18- to 29-year-old Black voters were the least likely to have seen information about voting by mail.

The campaign was launched in partnership with data science firm GSSA to recruit high-propensity Black voters as volunteers to encourage low-frequency Black voters to vote. Over the next two weeks, PIRG and NAACP chapters at colleges and universities across Florida are planning joint trainings and events to reach out to potential voters. Read our full press release here.